You are now leaving Ghosttown And Entering East Territory 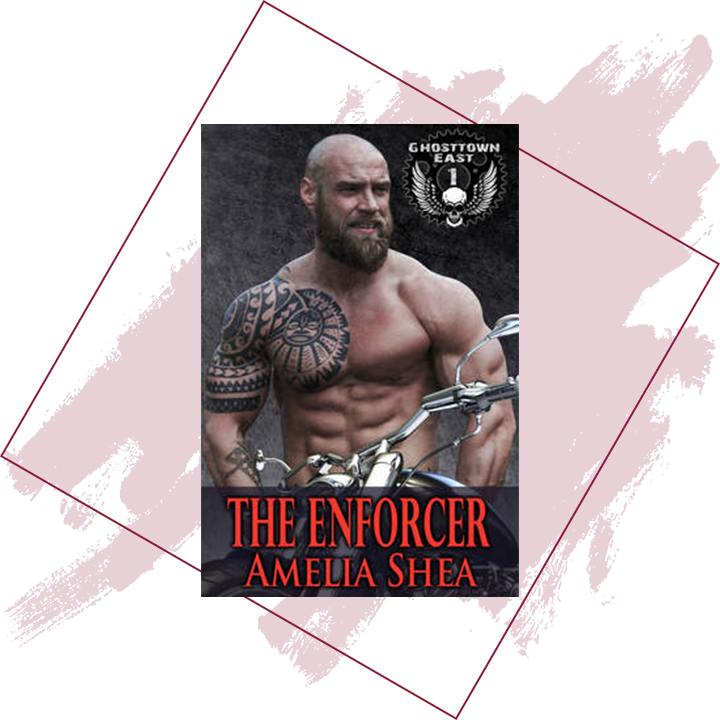 Single mom, Trini Hanson, is surviving. She works hard to pay her bills and raise her daughter, finding peace and a sense of family surrounded by the love and safekeeping of her brother's motorcycle club, the Ghosttown Riders. But dealing with her deadbeat ex has left her exhausted and fed up, and she needs a vacation. Her daughter's trip to summer camp is just the ticket. Trini sets her sights on rest, relaxation, and fun. She's set her aspirations too high.

When Trini's path veers into Ghosttown East MC territory, she's caught between ensuring her ex's safety for the sake of her daughter and a dangerous liaison her heart won't let her refuse. She is tied to club life as the little sister of an MC member, and she knows the rules and follows them. Her love and loyalty will always rest with her brother, who practically raised her, and his MC, who created a haven for her and her daughter. But Trini never imagined the overpowering strength, care, and wide-open potential she found in one kiss from Roan.

Ex-con and enforcer, feared by all who cross his path, Roan Harris has earned his title and position in the Ghosttown Riders East. As a highly-respected club member since eighteen, Roan is the epitome of loyalty and willingness, acting on his club's behalf whenever he's asked. The last thing he expected was to have a woman he's been obsessing over fall into his arms. But with Trini comes chaos, including butting heads with a brother in another charter, an ex indebted to his club, and a child. Handling Trini Hanson and her problems may be monumental tasks, but Roan is inclined to do whatever it takes as long as it doesn't involve letting her go.

After months of sly, smoldering glances and midnight fantasies on both sides, it all comes to a head in the perfect storm. A battle against the club, a threat against Trini and her daughter, and a showdown of enforcer against enforcer. But Roan understands gut-deep that this is the role he was born to play. He's about to show everyone that whoever threatens him, his woman, or her child will see exactly why they call him The Enforcer.

Sloane Baxter is a good girl. She may not have an enviable or desirable past, but she's making her future perfect, including all the things she dreamed of, a solid home, a job she loves, and a life she's created despite the hurdles she's had to leap. Sloane is living her life on her terms. She doesn't realize those she trusts are pulling her deeper into a dark world she knows nothing about, peopled by some who threaten her safety. Then, an encounter with the Vice President of the notorious Ghosttown East Motorcycle Club upends her life and reels her senses. He's completely wrong for her, but she can't shake the memory of their encounter.

Adam "Blade" Cody proudly serves as the VP of Ghosttown East MC. He's a leader, the second in command, and makes his club his priority. Until Sloane shows up, wreaking havoc and chaos and making him rethink his priorities. Blade's attraction to the nosy little pain in the neck is overwhelming, but when her past leads her down a path his club knows to avoid, the line in the sand is drawn.

But when Sloane sets off on a risky solo mission to uncover the truth, she's ill-equipped to handle the consequences. The self-proclaimed rule stickler must break all the rules to discover what's going on around her, while Blade must make certain her ignorance of the dark side doesn't get her hurt.

Blade and Sloane don't make any sense on paper, but their fates are sealed in real life. And yet their trajectories are heading them toward places that could destroy the life they want to build together. 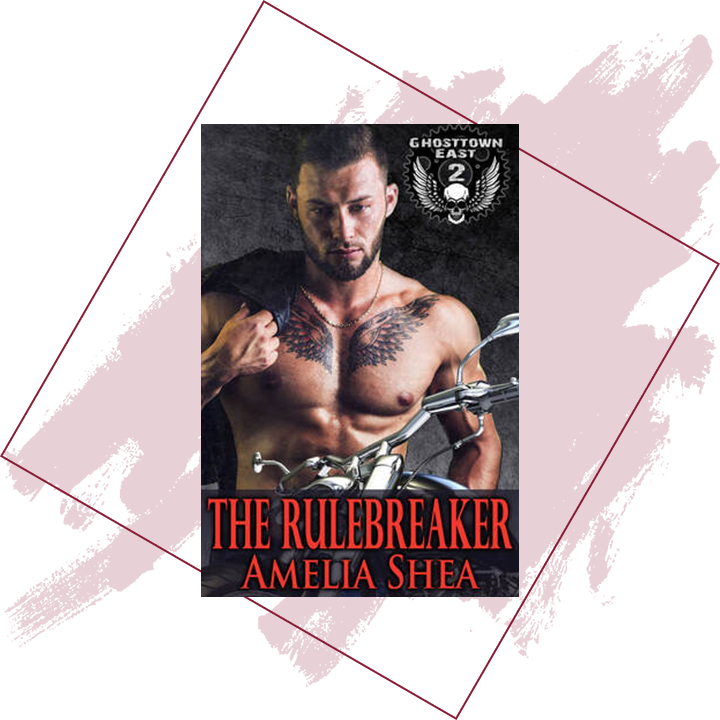 A failing business, a shady deal, and the ultimate betrayal of her ex-boyfriend have Everleigh Fay doubting everything she knows or trusts. One night out to break free and forget her responsibilities puts her right in the path of a man who will surely be her next big mistake. Any biker associated with her two-timing ex is the last man she should get involved with. But resisting the kindness and sweet words of a blue-eyed biker who makes her heart race and her body temperature spike proves to be a mountainous task.

A devoted and loyal member of Ghosttown East, Mason "Ice" Dillon lives and breathes the biker lifestyle. He fights hard, parties harder, and lets nothing stand in the way of backing up his club. Nothing else matters. Ice thought he wanted until a chance encounter with a prospect's ex-girlfriend changed everything. One look is all it takes for Ice to ditch his bachelor ways and trade his single status for the sweet, beautiful woman who invades his world. Her trust in men is badly damaged, but Ice is willing to do whatever it takes to claim his woman.

Ghosttown East MC has new plans for Grove Mill, and business and pleasure will come together in the perfect storm. Ice's devotion to his club will clash with his need to protect his woman and their future. While Ice fights to unravel the chaotic mess of Everleigh's life, she's desperate to keep her head above water and not fall for a man who will betray her again. The obstacles against them could ultimately destroy them, but nothing worth having comes easy.

Quiet and reserved bookkeeper, Wren Agnew strives to be highly efficient and inconspicuous. She calculates and formulates plans to cover every possible hitch or challenge while remaining totally behind the scenes. Every second of her life is meticulously orchestrated and intentional. Wren doesn't do surprises, she doesn't veer off course, and she certainly isn't prepared for the unruly, arrogant, sexy biker who storms into her life like a hurricane, taking out everything and everyone in his path. Taking chances, especially with her heart, is not an option, and he's a risk she can't afford to take.

Ghosttown East MC's notorious bad boy, Andrew "Con" Fallon, wants to leave his mark on a club he's devoted to and break free from his troublemaker reputation. But a devastating loss has left Con bitter, frustrated, angry, and striking out at anyone who crosses his path. Con's grief-driven rage and drive for answers have put him at odds with his MC president, strained his ties with his brothers, and possibly threatened his chance with the one person capable of softening his stone-cold heart. Wren could be his salvation if he doesn't screw it up.

Wren's personal and professional life is twisting upside down, her secrets threatening exposure, and her connection to a dangerous world could cost her everything. She wasn't expecting Con, nor can she envision a future while her past overshadows everything. She's the last woman any man should want to get involved with, unless that man is Con Fallon. Twenty years ago, she made a promise. Two decades later, Lil DeVries is still making good on it. Any hope of a romantic future was dashed years ago. Work, hustle, repeat. There were no other options. Lil did what she had to do to make a better life for her and her son, even if it meant entering a world where only the strong survive and the resilient prevail.

It's been a long, lonely road climbing the ranks, but Lil has repeatedly proven herself, earning her title as a loyal, committed, and trusted ally to one of the most notorious rulers in The Underground. Her life, though unconventional, is predictable. That is until her professional life collides with her personal, forcing Lil to choose sides. Does she stay true and loyal to the Underground or go rogue and follow her heart into the arms of a biker?

The President of Ghosttown East MC, James "Gunner" Fallon, was born to lead. It's his destiny. When it comes to his club, no one else matches his loyalty. He's been devoted to East, his brothers, and the MC life since he first joined out over two decades earlier. After a short hiatus in search of the truth, it was a long journey back to the East, but Gunner is committed and determined to take his club where it belongs. Safe and untouchable. But there's a hitch in his plan. A dark cloud was looming over the club and his son. The MC can't move forward without closure, and the answers they seek can only be found in the dark and dangerous world of The Underground. He doesn't expect a dance with the devil, facing off with a woman who might hold all the answers East is looking for but could be his downfall.

Lil DeVries is the ultimate wildcard with ties to both The Underground and East.

Two hundred fifty dollars. It's what Camille Gwin was worth twelve years ago when she was traded to the leader of the Underground to pay off a debt. Barely an adult, she was initiated into the harsh reality of a new world. The Underground. Camille knows how it works. Play the game or get played. Her rise in the Underground came at a cost. Life lessons she gained along the way have taught her one thing—trust no one. It's been her pledge for over a decade. It has kept her safe. Until he walked in, changing everything she thought she knew.

Maxwell "Tracer" Hardy knows how it all works. His life with the Ghosttown East MC is the only one he's known for years. Tracer has his demons, a past most people would eagerly forget, fused from a painful childhood, the loss of trust, and abandonment at a young age. It wasn't until he joined the MC that he found his true family, and Tracer would do anything to keep them safe and get retribution. He's known as the realistic, clear thinker, honest, standup brother, but deadly when he needs to be. Tracer lives up to his reputation. But something has shifted in his world, bringing in someone he never expected. And can't seem to forget.

When a long overdue debt is called in, Camille knows what she has to do. The stakes are high and possibly deadly if her betrayal ever comes to light, but that doesn't stop her. It's a chance she's willing to take to repay the debt. The plan is absurd, but Camille and Tracer are willing to do their part to ensure justice for East and the brothers.

A debt, a fake relationship, and a risky plan partner Tracer with the elusive Chameleon. What could go wrong? The Nomad (Ghosttown East Book 7)
Is Coming soon Summer of 2022!